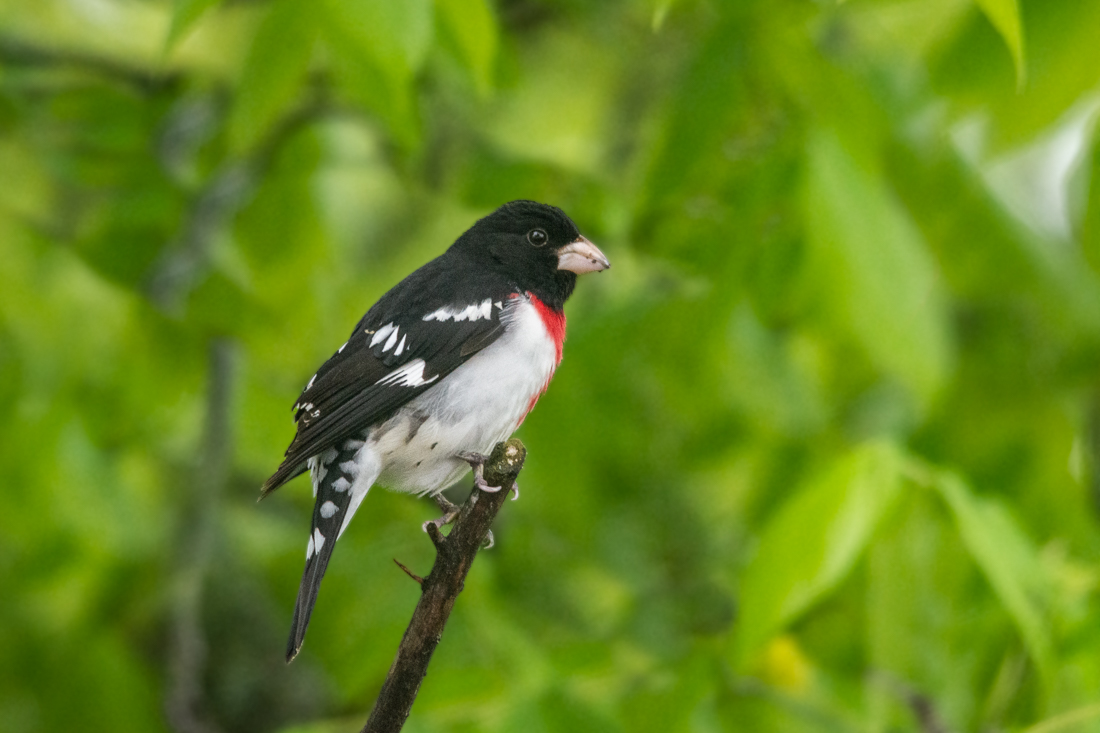 After hearing reports of these birds in the area, a pair of rose-breasted grosbeaks finally showed up in our yard. The male is stunning with his bold colors... 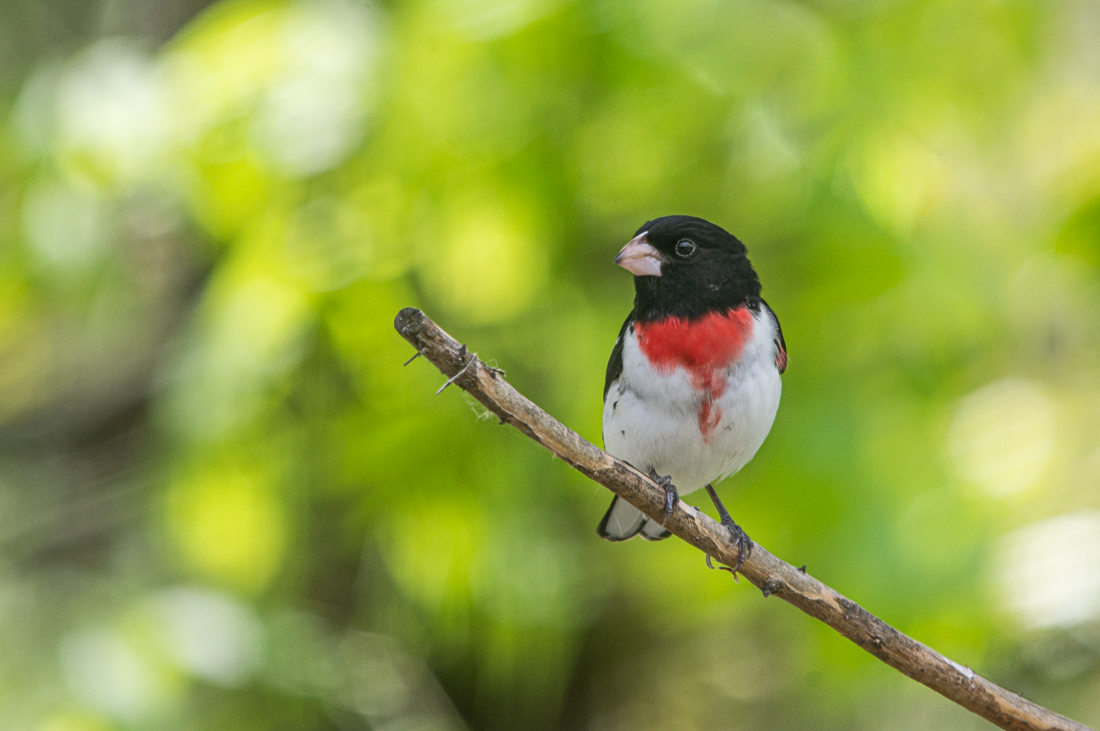 ...and he wears his heart right out in front, where everybody can see it. 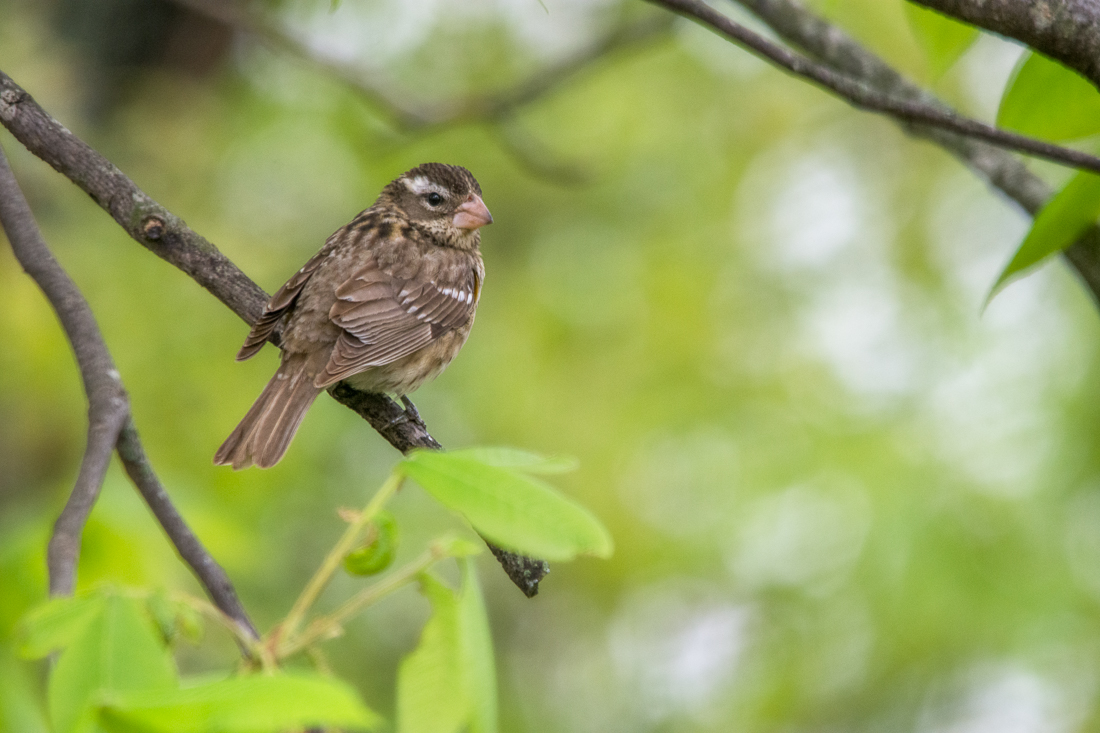 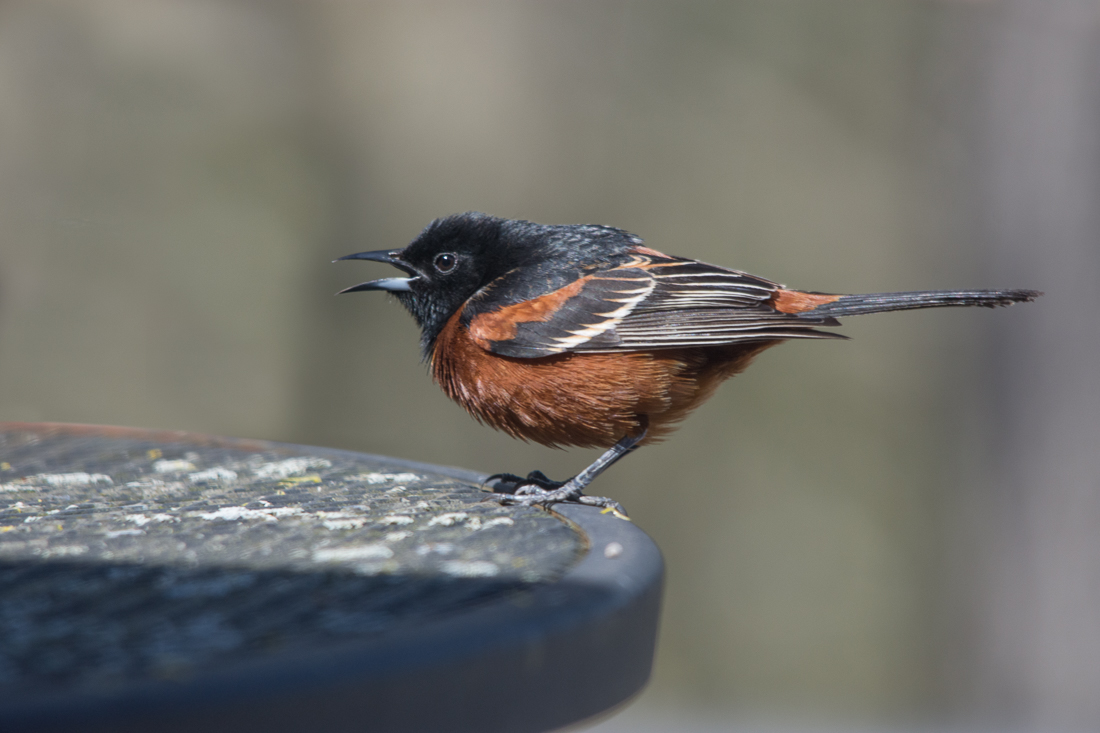 Orchard orioles have also made an appearance here lately. They are smaller than the Baltimore orioles, and instead of the brilliant orange feathers of their cousins, theirs are dark russet brown. 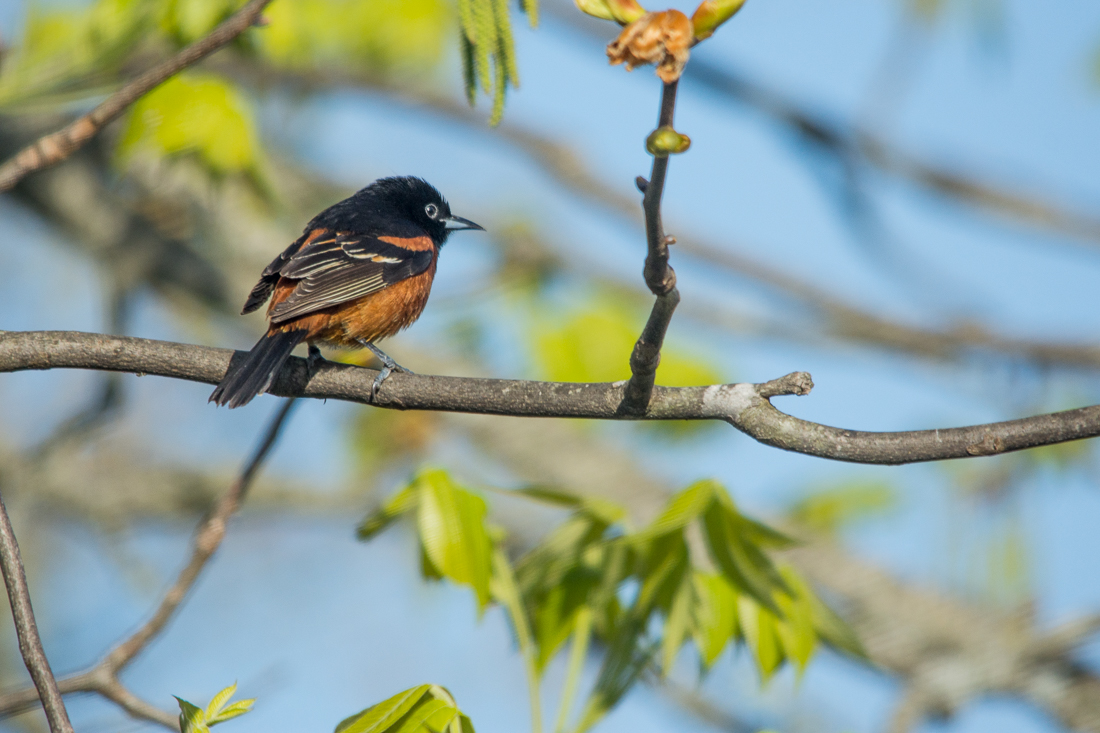 The males of both species may be singing the most beautiful songs in our forest, but I think the grosbeak is my favorite by a feather. You can hear them here:
Rose-breasted grosbeak song
Orchard oriole song
Posted by Connie Smiley at Friday, May 06, 2022 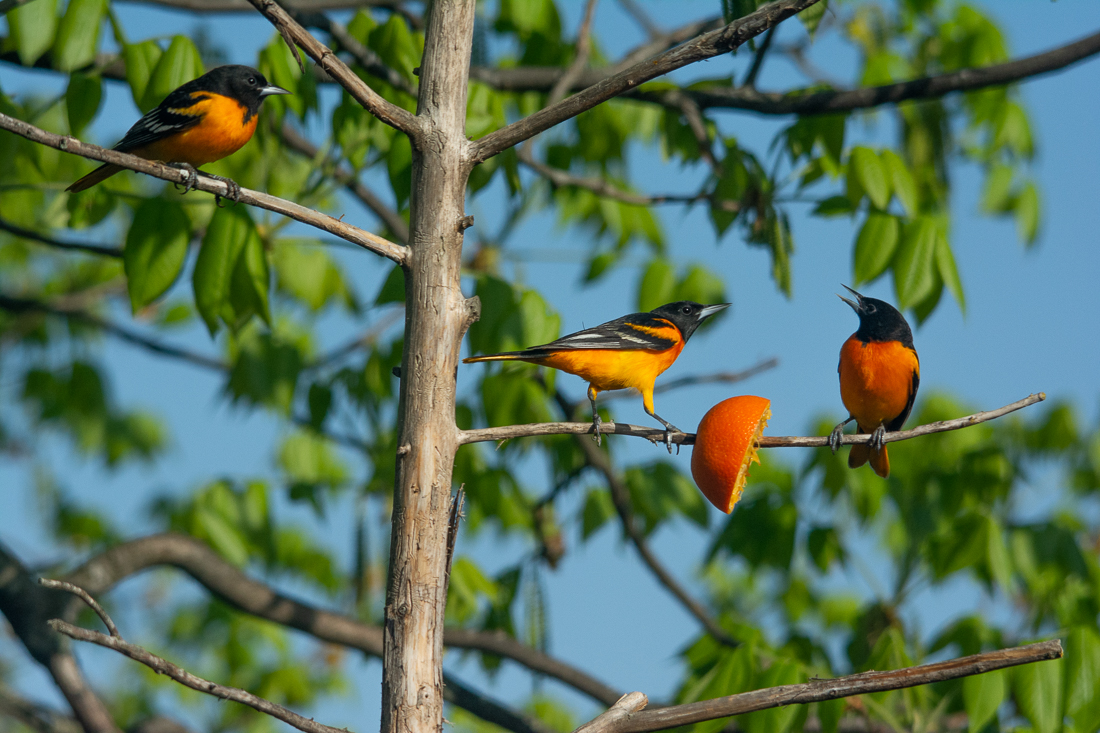 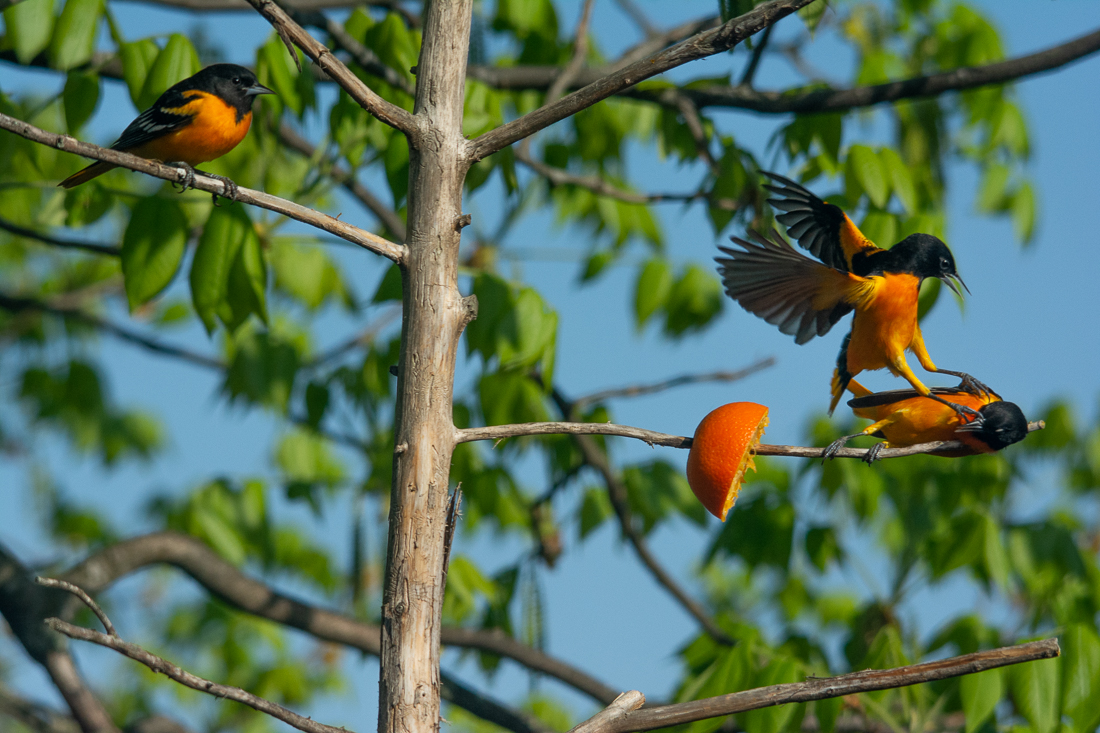 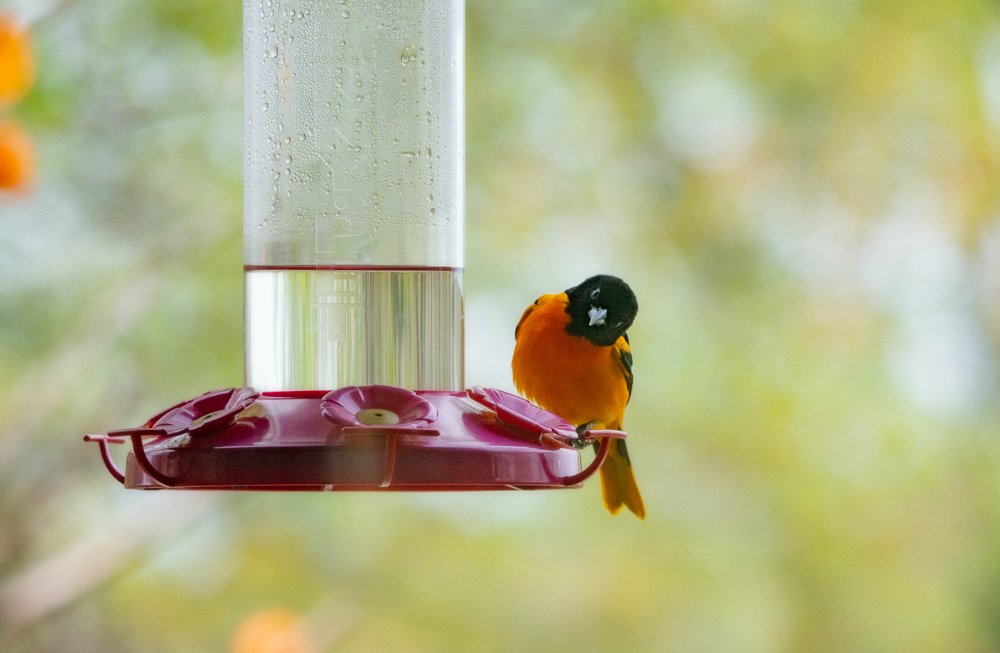 Nearly a week ago, in the early light of dawn, something looked out of place at the hummingbird feeder out our back window. A male Baltimore Oriole, dressed in brilliant orange and black, was perched there trying to sip a liquid breakfast.

These birds sometimes migrate through our area, and although we'd heard reports of them here in the past few years, it has been four years since we've seen any in our yard. Some years, they spend a night or two and are gone, but that year they came in a large flock and stayed for a fortnight. Their antics became a typical conversation starter. Instead of "Get your turkey?" the standard greeting in town was "Are you feeding the orioles?" 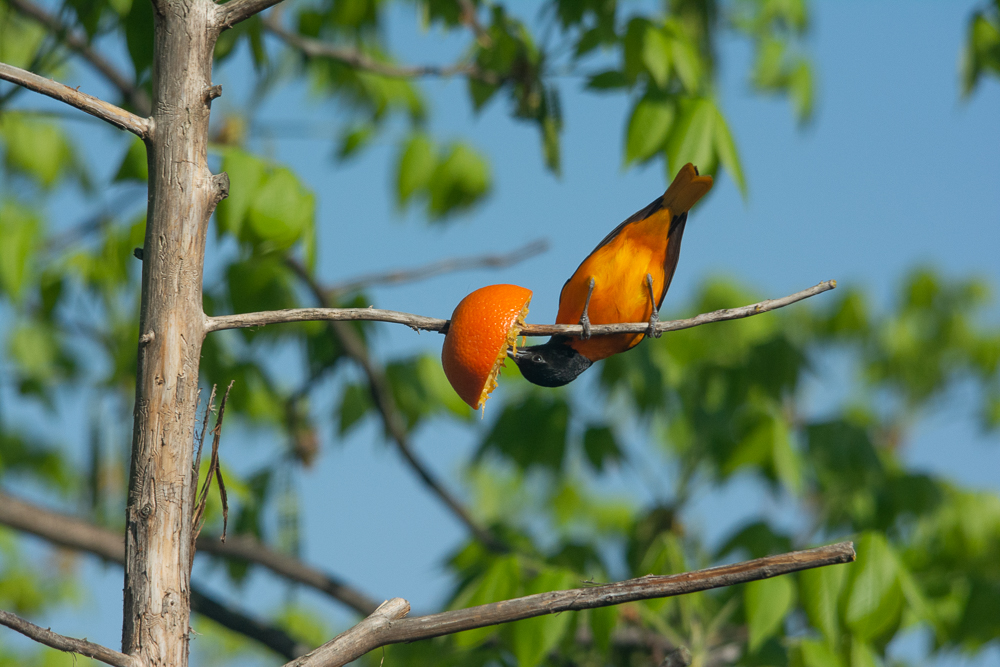 Attached to our deck, near the bird feeder, is a bare cedar tree, and the limbs make good perches for birds. They also provide an excellent place to skewer oranges, so I cut some in half and decorated the tree with the juicy fruit. It didn't take the orioles long to notice. 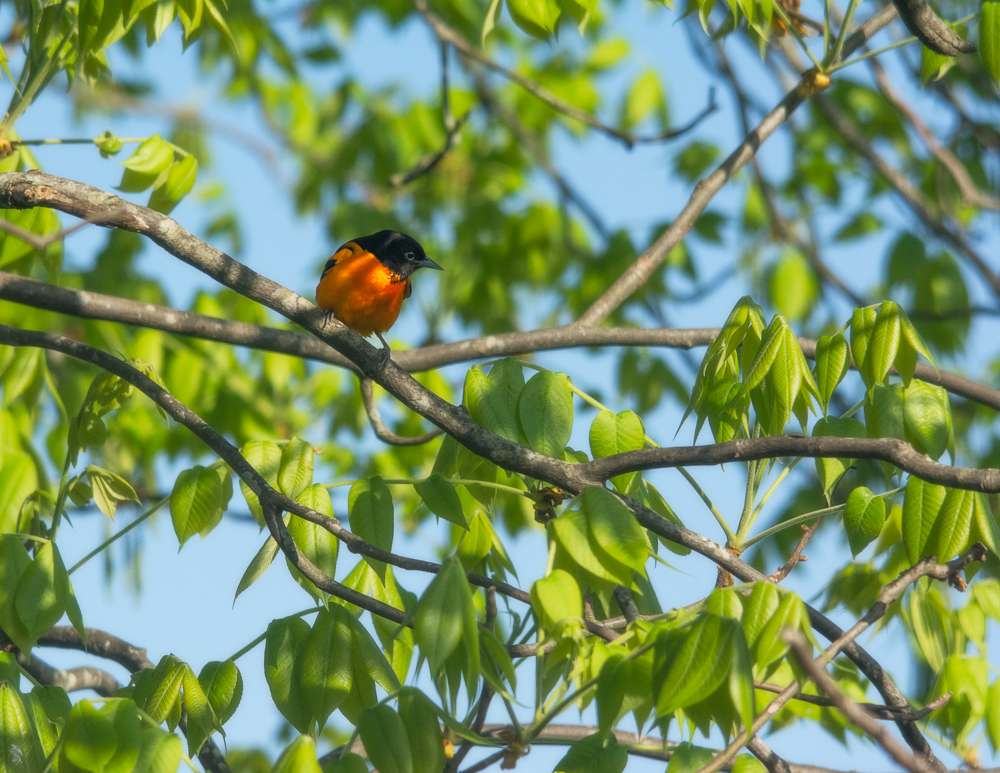 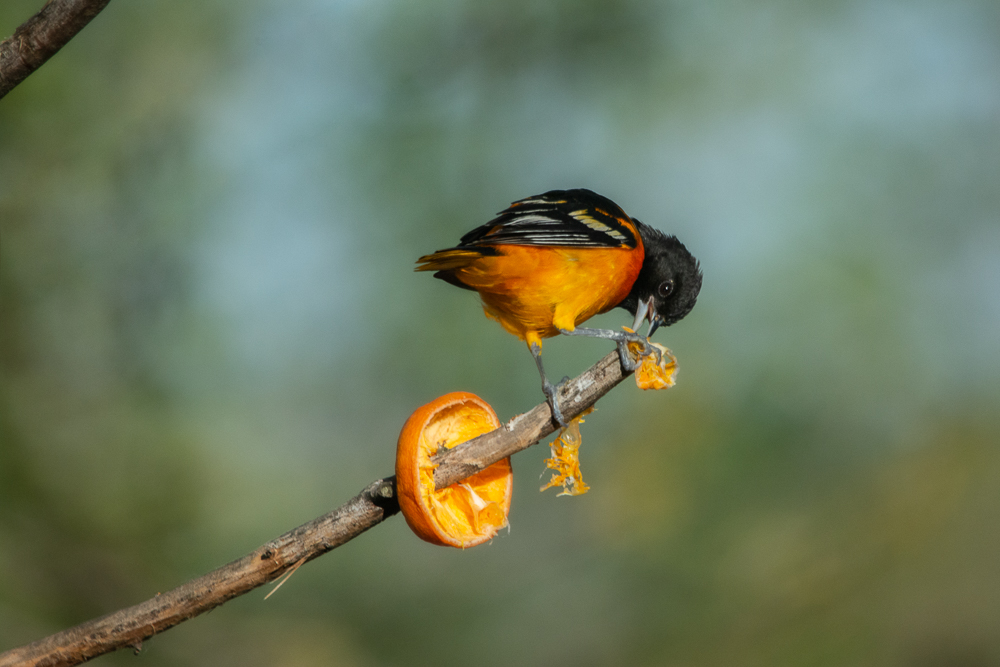 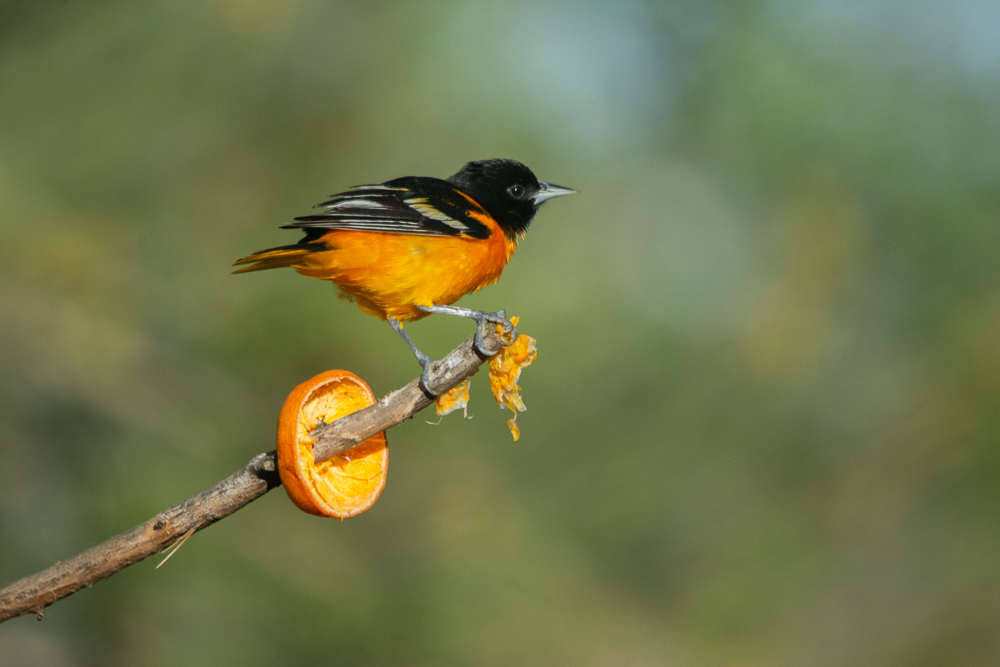 They would fly down from their perch high in the hickory tree, land near an orange, and dig in, scrounging out every morsel and picking the oranges clean, like a lion cleaning the bones of its prey. They are endlessly entertaining, and for the most part, the oranges have kept them off the hummingbird feeders. 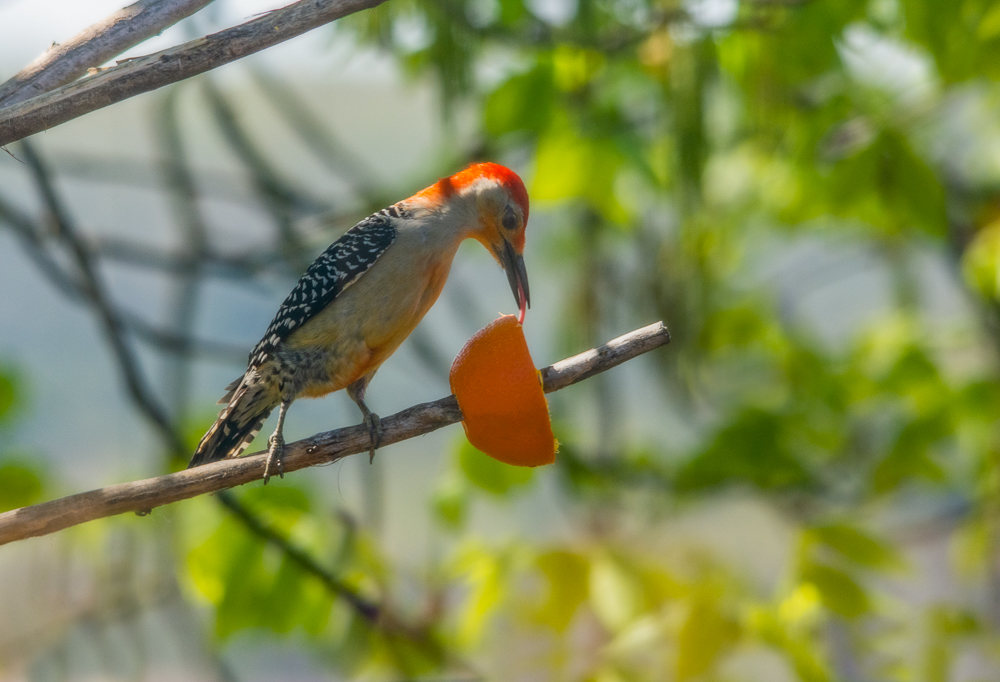 For a while last evening, the hummingbirds were on their feeders, the orioles were on the oranges, and the woodpeckers were eating sunflower seeds and bugs. Everything was as it should be. Then a hummingbird started drinking from the orange. What's next? We can only wonder. A woodpile on our front porch hosts a variety of small creatures, and one upright log has become a favorite perch for the first chipmunk of the season. We've named him Primo. On a recent morning, he scrambled to the top of the log and groomed himself as if he had an appointment with Donald Trump that day.

It seems chipmunks might anticipate spring even more than we do. After all, they spend most of the winter in the dark. There is some speculation in the scientific community about what makes chipmunks emerge from their dens. But I like to imagine that a day comes in their underground home when, sundial-like, light makes its way down the shaft of their front hallway and shines on the kitchen table, and they know it's time to come out. Or, possibly they've been hearing the Spring Peepers, as we have, or the Carolina Wrens breaking their winter silence. It must have been rewarding when Primo poked his head above ground to see daffodils and crocus blooming.

They say if you don't like the weather in the Ozarks, wait a day. The chipmunks must know that one, too. Now the weatherman is predicting snow, so they'll probably be tucked back into their dens tomorrow, hopefully for the last time this season. 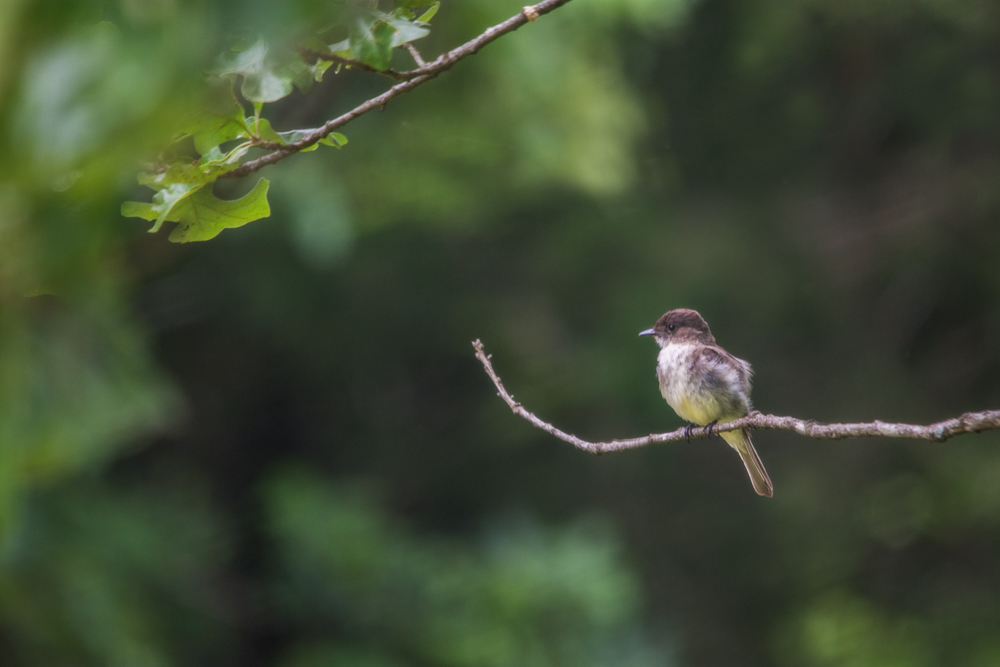 At the end of a perfect cloudless summer day, the first full day of summer, I sat in front of the living room window and watched fireflies in the growing dark. The stars were dim under a full moon, but lightning bugs made up for their lack of luster, floating up from the grass like sky lanterns on a rising stream. The shadowy figure of a raccoon passed in front of me on the deck.

My mind was elsewhere, specifically on a baby bird cradled in a used Phoebe nest on a windowsill outside. Eyes closed tight in sleep, it missed the fireworks display, but I wondered if it heard the Spring Peeper's lullaby.

The day before, a plaintive cheeping drew my attention from my desk to the window. Outside of my basement studio, a nestling bird was struggling to right itself on the rocks below. As I watched, it toppled face down into a crack between the stones and lay still. I guessed it was a Phoebe; the adult birds have been watching the house lately. I had been looking for a nest, but thus far, I was unsuccessful. There are many potential nest sites under the deck, and I didn't want to be too intrusive.

Phoebes are endearing birds. They are one of the earliest migraters to return to the Ozarks every year, and it's always good to see them back. They wear muted colors, shades of gray and white with a hint of yellow, but, what they lack in color, they make up in personality. They are members of the Flycatcher family, and they wag their tails happily and sing their name: "Phoebe, Phoebe, Phoebe." They construct their nest of mud grass, hair, and moss and attach it to an upright, often to the side of our house. 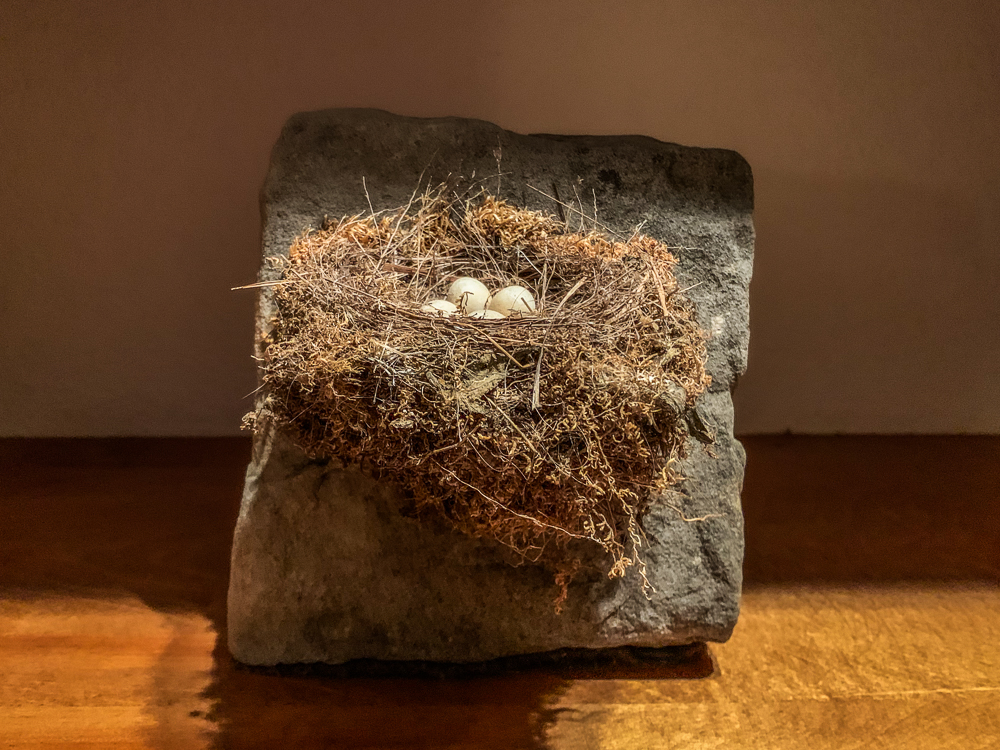 Several years ago, after a pair had nested near our front door, a big black snake came and scared them away. They abandoned their nest, eggs and all, and never came back. I took the nest down and glued it to a fieldstone from our land. I liked it as a decorative item in the living room, but I didn't dream it would ever be functional again. 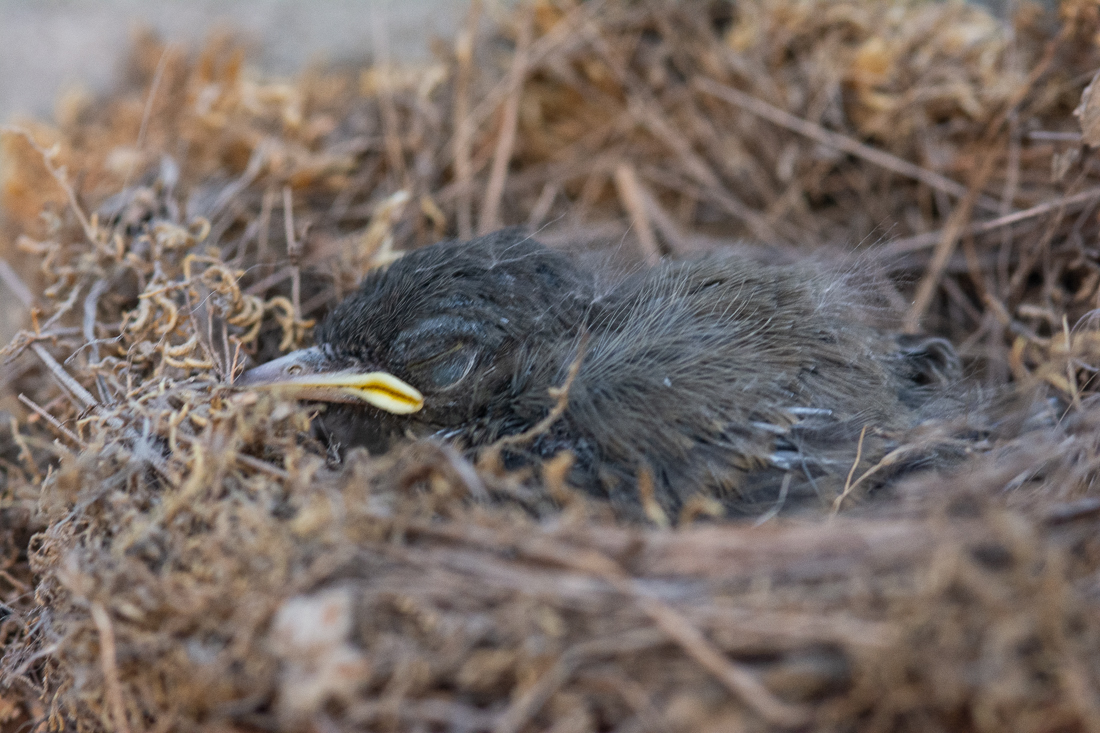 The nestling below my window needed a place to lay its head, and it didn't seem like there was a lot of time to spare. So I took my abandoned nest outside and, scooping up the little bird, placed it inside the soft cavity. It looked happier immediately. 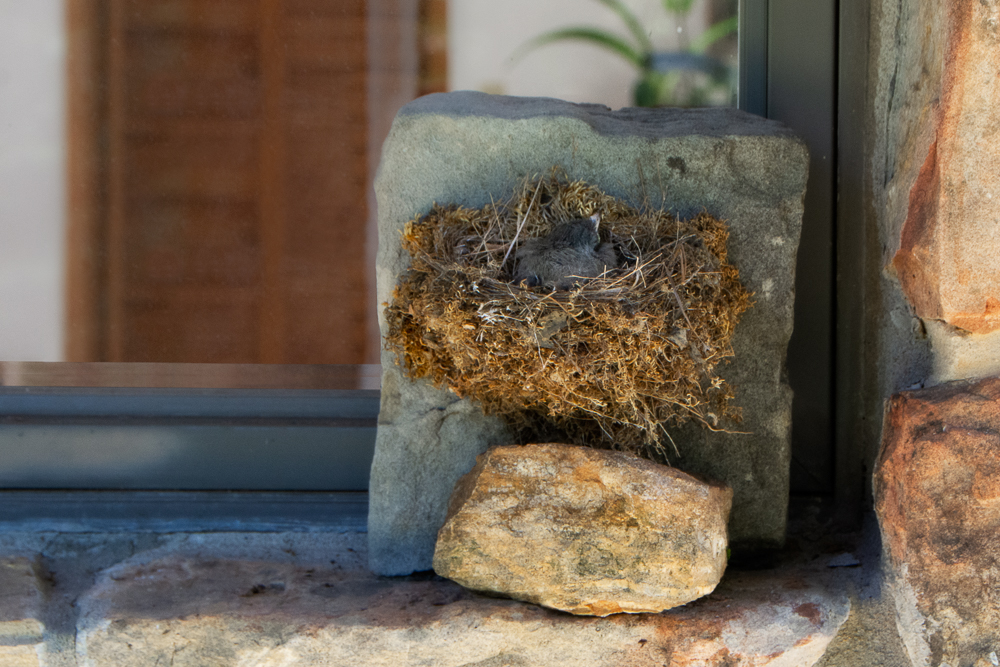 Its only real chance of survival was for its parents to find it. A windowsill near where I first saw the nestling seemed like the best choice, so I propped it up there, supported it with another rock, and whispered a prayer to the nestling's Maker.

It was still alive the following day, and the next, and I started to exhale. It was clear that its parents were feeding it. By the third morning, it was stretching, and I felt like a proud aunt. 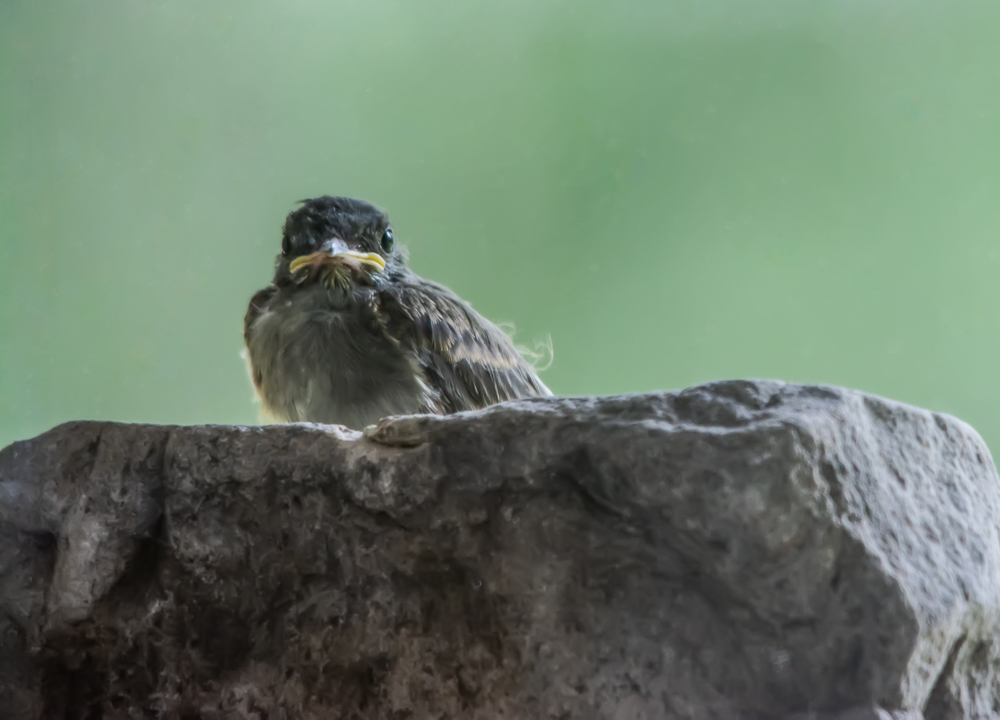 On day five, the little bird made its move. First, it climbed up from the nest to the top of the rock the nest was attached to. Then, peering inside my studio, it greeted me with an inquisitive stare. 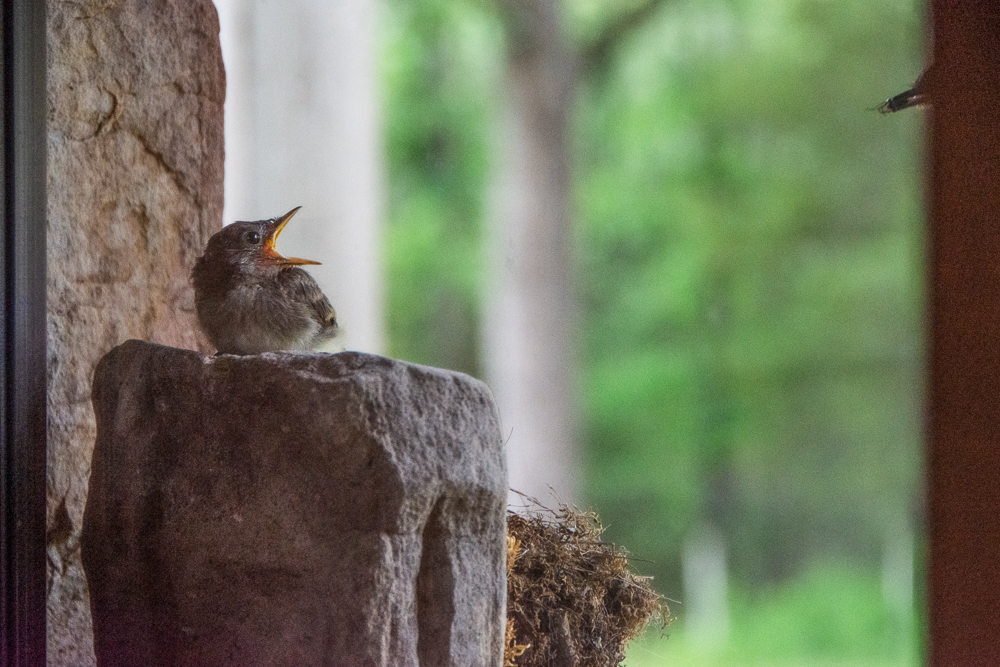 Before long, the parent came with a dragonfly... 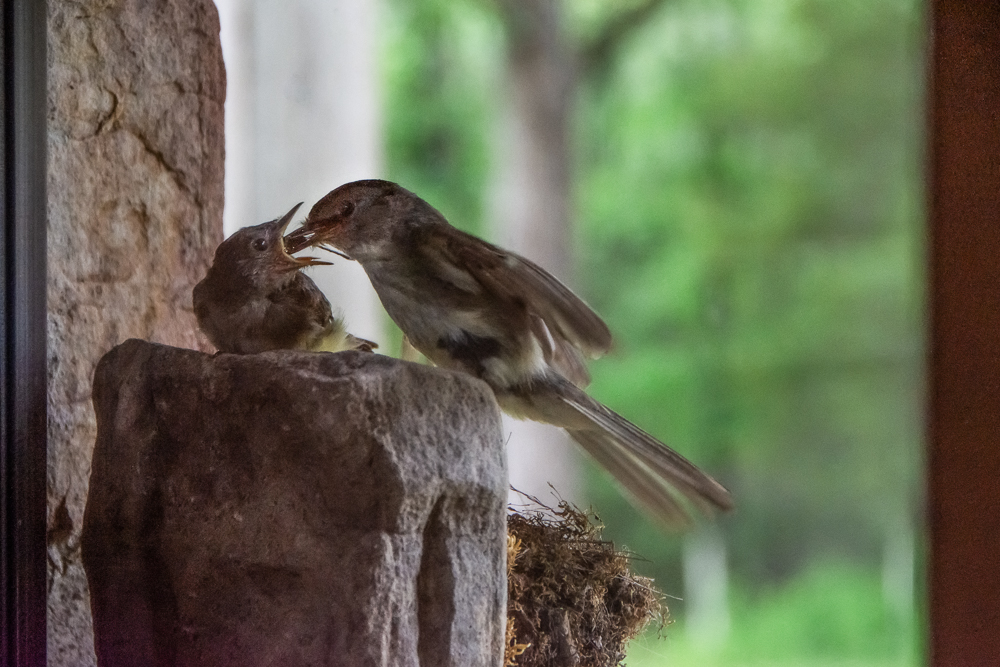 and the little one gobbled down a tasty snack. 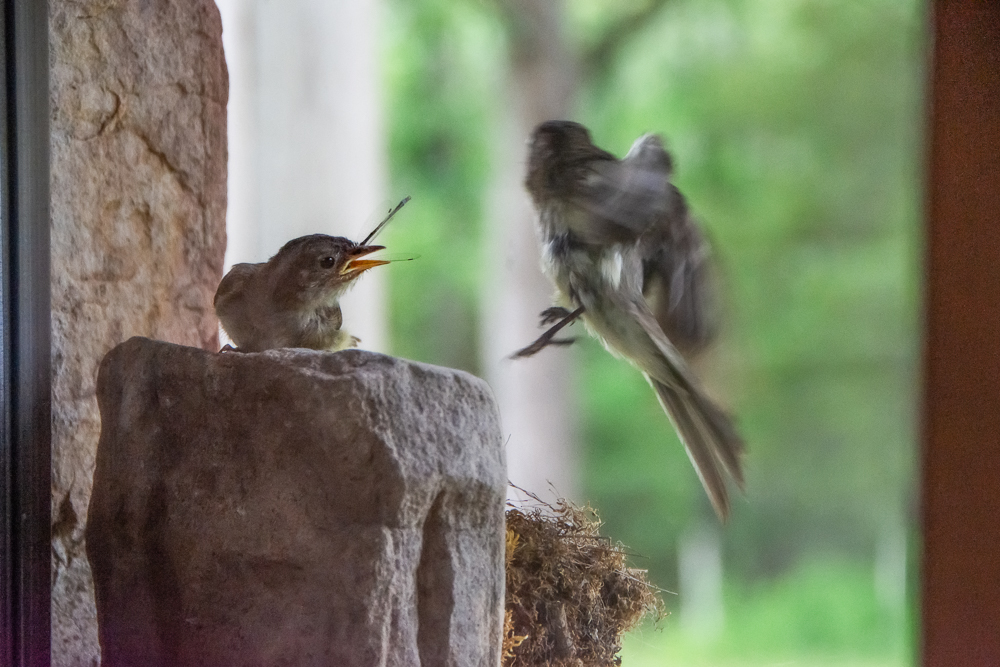 The next time I checked on it, I saw only a concerned parent bird perched on the nest. On closer inspection, I found the fledgling sandwiched between the window and the rock that held the nest. Then, just as I was contemplating another intervention, the fledgling freed itself and flew to the ground. It made short flights of a few yards while its parent watched from its nearby perch before they flew off together into the woods. 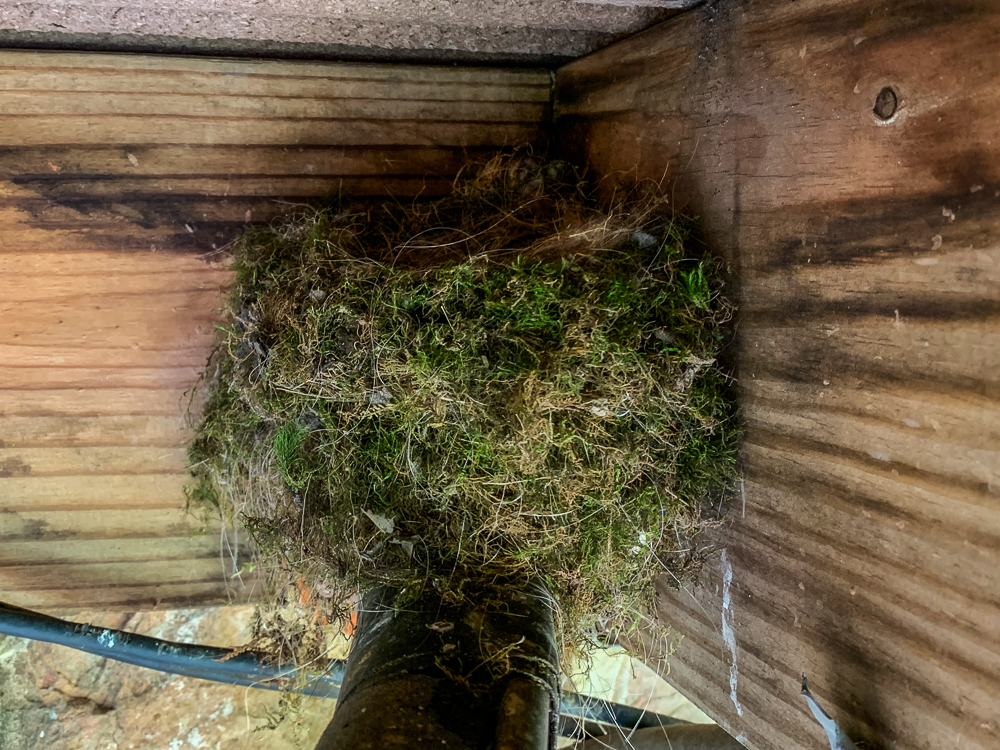 With the fledgling gone, I felt at liberty to search for its nest of origin, and I found one, not surprisingly, near the place the nestling had first appeared. Tucked in behind a rafter, it was not obvious, and it was a much better location than the one by our front door. In retrospect, if I had found it earlier, I could have popped the baby back in its nest, and it might have lived happily ever after. Or, just possibly, that nest was too full, and the nestling needed a place of its own. I'll never know for sure, but I imagine by now, it's at the top of its Phoebe flight class and is learning to wag its tail and sing.

I really like happy endings. So far, this is one.